Scents and Fish Attractants for Bass Fishing. Do they work?

I figured I’d open a can of worms here (no pun intended) and ask about whether you use scent or not. 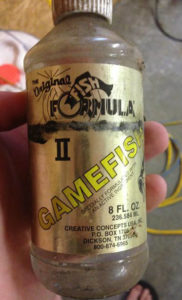 Way back, many, many years ago (late 1980s and very early 1990s) I used to use an attractant called Fish Formula on all of my soft plastics and jigs to give them more appeal to bass. Or at least that’s what I thought it did.

The stuff was basically anise oil. It was a clear liquid in a squirt bottle. It smelled like black licorice. And it was messy to use.

I used it for quite a while and really didn’t know if it made a difference or not. But at some point, for reasons I don’t really remember, I just stopped using it.

But no matter what the reasons, I stopped using it. And I kept right on catching fish.

I went without it, while my brother-in-law continued to use it. And I continued to catch just as many fish as he did, without having to deal with messy, oily goop on my baits and my hands.

That was a very long time ago. I still don’t use scent. And I still catch a lot of fish without it.

Do They Work or Not?

My own personal opinion is that it doesn’t make much difference, if any at all.

But, day in and day out, using a fish attractant makes little or no difference in how many fish you catch, especially with bass.

Bass are sight and sound feeders, not scent feeders.

Yes, they do have olfactory senses. But these are secondary, especially when compared to their eyes and their lateral line nerves.

You see, fishing tackle companies make a ton of cash when they can convince us, avid bass anglers, that we “need” their product. And once they can convince a large percentage of us that they have a product we need, they cash in on it, big time.

Not convinced? Take a look at all of the scents available to us these days. 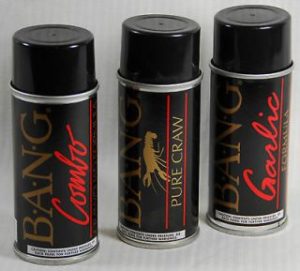 Not long after Fish Formula had become popular, a new arrival showed up on the market. B.A.N.G (Bass Anglers New Gimmicks) hit the marketplace with a spray can attractant (the first of its kind). It was less messy and the packaging was much more attractive.

Bingo! It took off like a rocket and is still available today, even though the original attractant, Fish Formula, has long since disappeared.

And now we have more scent and attractant options than we can shake a proverbial stick at.

Berkley hit the market with their own various versions of fish attractants. They offer Power Bait attractant, as well as Gulp.

We also have Hot Sauce in a squirt bottle, very similar to the original Fish Formula.

So, there are lots of options. In fact, there are enough options to confuse you in a hurry.

Anyway, like I said, I personally don’t believe that scent makes a difference when looking at the big picture.