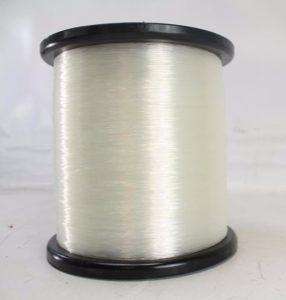 Last week during a guide trip I had a good fish break my line immediately after setting the hook. It felt like a really good fish when the rod loaded up. But it was gone in less than 2 seconds or so 🙁
When I retrieved the line, there was a tiny little curl at the end of the line, indicating that it broke at the knot.
I rarely have my line break, and when I do, it is almost always my own fault for forgetting to check the line after landing a fish, or maybe after getting caught on a rock or other underwater obstacle/cover. So I shrugged this off as carelessness on my part, tied on another spinnerbait and kept fishing.
Then, last Friday night, I fished in a club tourney. I had a spinnerbait tied on that same rod, still using the same line. I had thought about stripping it off and putting new line on, but I was running late the evening of the tourney and didn’t want to take the extra 5-10 minutes to do this before leaving my house. Silly me ?
About 30 minutes into the tourney, I was throwing the spinnerbait and felt the line get heavy. I instinctively set the hook. The rod loaded up pretty good and then everything went slack. Another fish lost due to line breakage.
I reeled in the line and, sure enough, broken at the knot again. What the heck??
So this past week I stripped that line off and spooled on fresh 17 lb. line. I was all set for another fishing outing! Or so I thought.
Last night I fished with a good friend for a few hours. It was a tad chilly after the sun went down, but we managed to find some bass willing to bite anyway ? 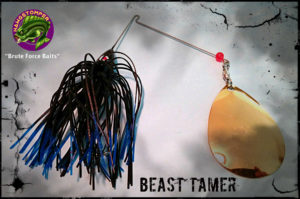 I caught several fish on a spinnerbait after dark, one of which broke off right at the boat as I was hosting it aboard. It was less than 2 lbs., so the line should never have broken that easily. Especially in light of the fact that I had just respooled with fresh line after breaking that other fish off last Friday night.
I took a look at the line and, sure enough, it broke at the knot again ?
So, I tied on another spinnerbait, but tried a different knot. Per the suggestion of Larry Nixon, I used the Trilene knot. It was pretty easy to tie. Just unfamiliar to me.
I landed another fish without incident, but using a different knot didn’t sit right with me, for the sole reason that it wouldn’t help me figure out what was really going on. I’m a troubleshooter at heart, and i know that there are specific ways to go about tracking down a problem. Changing the knot wasn’t one of them… yet.
So I bit that knot off and went back to the Improved Clinch Knot, then I went on to hook a few more fish, with no further breakoffs.
Today I did my troubleshooting, on my back deck (of my house, not my boat!).
Here’s what I found. First, I had a sneaky suspicion that the problem was really very simple; bad line.
But I was also wondering if maybe I had gotten a bad batch of spinnerbait heads, maybe with some wire frames that had rough spots in them.
So I grabbed several of the spinnerbaits that I have made and a length of line from the rod that has been breaking off. Keep in mind that I had just respooled this rod and reel two or three days ago and have not fished with it yet, until last night.
I tied one end to a spinnerbait and wrapped the other end around my gloved hand and began to pull as hard as I could. At first I just gave short, hard pulls, to see if I could cause it to break that way. Nothing happened. It held fine.
Next, I cut that section off and re-tied again. This time I wrapped the line around my gloved hand and just simply started pulling steadily, increasing the amount of pull. Sure enough, the line snapped. Not at the knot, but it snapped nonetheless.
I did it again. Snapped again. Then once more, it snapped at the knot.
I had no idea how much tension was really on the line when it broke, so I didn’t know if I was exceeding the lb. test (17 lbs.) of the line or not. 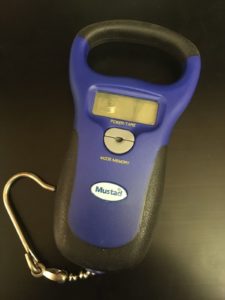 I went to the garage and grabbed my small digital fishing scale from my boat.
Back out to the deck to run some more tests.
This time I tied on the spinnerbait, wrapped the line around my gloved hand and hooked the spinnerbait to the scale.
I started to pull. 8 lbs. 9 lbs. Snap!
Again. Re-tied and hooked the spinnerbait to the scale. Pul, pull, pull… 12 lbs. Snap!
Definitely not good.
Definitely (at least from what I could tell so far) bad line.
Back out to the garage to grab a brand new spool of line from the cabinet where my line gets stored.
Tie on the spinnerbait. Wrap it around my glove. Hook the spinnerbait to the scale. Pull. Pull. Pull. 12 lbs., 13 lbs. 14 lbs. 15 lbs. And that was all I could get with the angle I was pulling at. 15+ lbs of pull. The line held perfectly.
Let me tell you that 15 lbs. of pull is a heck of a lot of tension! I never realized how much 17 lbs. of tension was until I used my scale to measure the lbs. of pull on the line.
I know this isn’t terribly scientific, using a small digital scale, but it beats the heck out of not using anything at all and just guessing at it. It’s all part of troubleshooting, using the tools at your disposable to get some kind of measurable results.
So, in the end, based on my tests, the line breakage I have been dealing with was due to bad line. Nothing more and nothing less. The spool of line that I was using had become old and weak. Plain and simple.
And I also learned how much tension 17 lbs. of pull really is. A Lot!
So you can bet that I will be going through my rods this week and replacing all of that old, tired out 17 lb. test line with fresh, new line. And the breakage problems will be a thing of the past once and for all.
Look out, fish. You’re coming into the boat now!  😀